Curated markets data, exclusive trading recommendations, Independent equity analysis & actionable investment ideas
Subscribe
Curated markets data, exclusive trading recommendations, Independent equity analysis & actionable investment ideas
Explore
STOCK REPORTS BY THOMSON REUTERS
Details stock report and investment recommendation
Subscribe
POWER YOUR TRADE
Technical and Commodity Calls
Subscribe
INVESTMENT WATCH
Set price, volume and news alerts
Subscribe
At 67, Jeff Koons, the most saleable and formidably marketing-driven American artist, is looking up at the moon, with Elon Musk tethering him on the upshot journey. Musk’s company SpaceX will send Jeff Koons: Moon Phases, 125 miniature moon sculptures into space, each around one inch in diameter, which will remain on the moon permanently.
Marking 50 years since America’s first crewed trip to the moon (in 1969), the ambition and money involved in the project is staggering in scale and scope. The project will have several parts, not all of which are yet complete, and they will depict various phases of the moon, half as seen from the Earth, half from different vantage points in space, and a lunar eclipse—displayed together in space in a sustainably-built, fully transparent, compartmentalised cube. Each work will be named after a person the artist admires, those who have, in the artist’s own words in the press release that was released in the last week of June, “made accomplishments that are aspirational for our society”: Marcel Duchamp, Elvis Presley, Marilyn Monroe and Leonardo da Vinci are a few of the names. The artworks will “explore the imagination and technological innovation of the human race,” the press release further said.
Koons, who dominates much of the conversation around pop culture and art in America, is a neo-pop god—in language and approach, a direct descendant of French artist Marcel Duchamp and American artistic phenomenon Andy Warhol. This year, Koons takes a step into two areas for the first time: the Metaverse and the moon.
Each moon-bound sculpture will be accompanied by another large, spherical, stainless-steel sculpture encased in glass that will stay on the Earth, along with an NFT that corresponds with the sculptures on the Moon and the Earth. The sculptures to remain on Earth will feature a reflective surface—similar to Koons’ iconic sculpture Rabbit—mimicking the colours on the moon’s surface and a tiny precious stone, either a ruby, emerald, sapphire, or diamond, which will indicate the location of the landing on the moon.
Each digital artwork will reveal an image of the sculpture installed on the moon’s surface, along with “Jeff Koons’s iconic signature” and “other images,” says the release. The NFTs will be presented by Pace Verso in partnership with the project’s initiators, Patrick Colangelo of NFMoon and Chantelle Baier of 4Space. The release adds that proceeds from one of the first NFT sales will be donated to Doctors Without Borders/Médecins Sans Frontières (MSF) in support of the organisation’s medical humanitarian aid programs.
Koons said, of his most ambitious work so far: “I wanted to create a historically meaningful NFT project rooted in humanistic and philosophical thought. Our achievements in space represent the limitless potential of humanity. Space explorations have given us a perspective of our ability to transcend worldly constraints. These ideas are central to my NFT project, which can be understood as a continuation and celebration of humanity’s aspirational accomplishments within and beyond our own planet.”
If this ambitious futuristic enterprise takes off, scheduled to blast off by the end of the year, this would be the highest an artistic vision—and indeed the artistic ego that fuels it—would go in human history. It is likely going to have huge repercussions in the way technology can transform and propel artistic ideas, and probably change the way human beings view and consume art. One of the ironies of early modern art is that in trying to break down the traditional barriers between artist and viewer, embracing everyday objects, aspirational consumer products and objects of mass entertainment in sculpture and paintings—and, by extension, between art and life—many artists such as Andrew Warhol, the British sensation of the 1990s Damien Hirst, India’s Subodh Gupta to some extent, and others have alienated a large part of the public. These artists do not really yearn to reach a mass audience—far from it. Most of them smugly accept the role of exclusivity and feting that the art establishment assign them.
But the desire to involve spectators capable of responding to their art can’t be ignored in their journeys. And triumphantly enough, neo-pop gods like Koons represent the impulse antithetical to the rarefied realm of the art gallery, and from adhering to or reacting to artistic pantheons and schools that have informed much of artistic expression in the last two centuries.
Koons is a guy for whom more is always more—after all, his artistic ego is big enough to attempt outer space posterity—but he also is about the freedom to do what he wants to do. Artistic autonomy and a vision of what is art, instead of formalist concerns like how to create art, are his abiding motives—besides the millions of dollars that all his art fetches. All his works, taken together, all put together painstakingly with the labour of thousands of workers, can be seen as a kind of hyper-expressed scorn for rigid artistic structures of thinking, imagining and visualising.
Recently, Jeff Koons ’ sculpture Balloon Monkey (Magenta), fetched £10.1 million (£10,136,500) at a Christie’s auction in London. Created in 2006-13, it is the largest and the final piece in the artist’s celebrated series of balloon animals. Measuring 150 x 126 x 235 inches, the mirror-polished stainless steel sculpture was exhibited until July 3 in St James’s Square, adjacent to Christie’s headquarters in London. 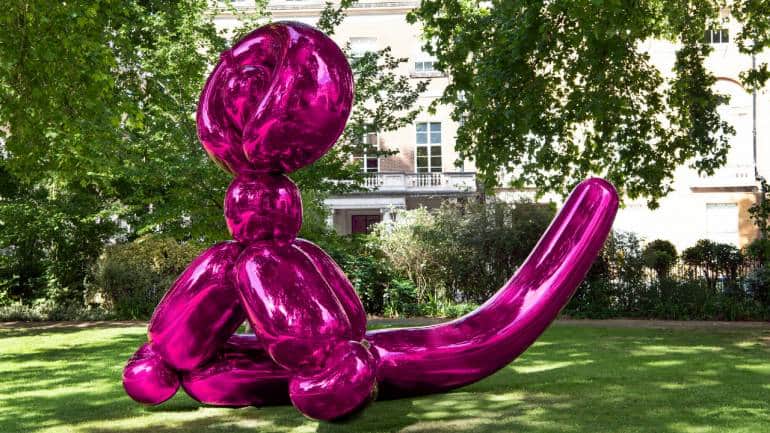 Jeff Koons’ sculpture ‘Balloon Monkey’ (Magenta).
Koons is a New Yorker born in Pennsylvania, influenced deeply by Duchamp and Warhol. In 1960s’ New York, Warhol consciously subverted traditional ideas of skill and craftsmanship as a way of personal expression. He adopted mechanical tools of the film camera and reels and silkscreen painting which helped his motive of embracing and glorifying the imperfections of ordinariness. “If you want to know all about Andy Warhol, look at the surface of my paintings and films, there I am. There’s nothing behind it,” the greatest phenom-artist of his time famously said.
With the mind-boggling ways in which technology can alter reality today, Koons is in an extremely advantageous position, given the same impulses that Warhol had in the 1960s and the fame, agency and wealth that Koons already has extravagant amounts of. His art is with the world’s most elite collectors, museum collections and public spaces. Like Warhol, he has declared his anti-esoteric, anti-critical enquiry mandate unequivocally: “Whatever you respond to is perfect, that your history and your own cultural background are perfect,” he has famously said.
Another statement Koons has repeatedly made: “If you are critical, you are already out of the game.” He admired Michael Jackson—and made a work titled Bubbles in 1988 as an homage to the king of pop, a sculpture in which Jackson sits alongside a monkey, made in gilded porcelain—because he did “absolutely anything to be able to communicate with people,” which,  he explained, must include all of Jackson’s cosmetic surgeries. It is a conscious shutting off from prevalent politics and social currents of any age for the sake of personal creative autonomy.
The years in which Koons burst on to the New York scene, the late 1970s,  was a time when the term “postmodern” entered the vocabulary of art critics. The civil rights, feminist and gay rights movements of the 1960s and 1970s had their lingering effects, also building up to the yuppie Wall Street culture of the 1980s. Graffiti was a rage; the art world was in love with urban art stripped of classicism.

Jeff Koons and Subodh Gupta are artists of a moment in our history that democratises everything.

This Week In The Metaverse: Meta Makes Deep Cuts And NFT Sales Drop 60% – The Drum

NFT Back to Basics: 5 + 5Ps of Marketing – Finance Magnates

JPEGs Are 'Not the Future of Web3 and NFTs': Polygon Studios Metaverse Lead – Decrypt