Crypto News
For the first time in years the price of gas on the Ethereum blockchain has dropped to less than $5 per transaction. And for the first time ever Polygon gas fees are higher than ETH. Artists that have been holding onto art may finally have a moment to mint those pieces.
Crypto prices are slowly rising but experts still say Bitcoin is on its way to passing the $100,000 mark. Some say it’ll happen within a year, while some say it could take five years. As we know with crypto, it’s a little hard to predict. Even though it’s at its low right now it’s still more than twice as valuable as it was a couple of years ago.
Crypto prices are always changing. These are prices at the time of writing, watch online for current prices.

NFT News
We all watched the craziness over the big NFT drops, first with Rare Pepes, Cyberpunks, and Cryptokitties in 2016, 2017. People were collecting everything that dropped, it was cool enough just to own an NFT.
In 2022, however, we expect NFTS to come with utility, some sort of a function. It only makes sense that the future of NFTS is Play to Earn games.
Play to Earn doesn’t necessarily mean free to play. A lot of the games that you can earn money playing require you to buy a wearable or an NFT of a character, car, or a shoe, etc. The reward can be a cryptocurrency, an NFT, or the value increase of an already purchased NFT.

A couple of our favorites are: 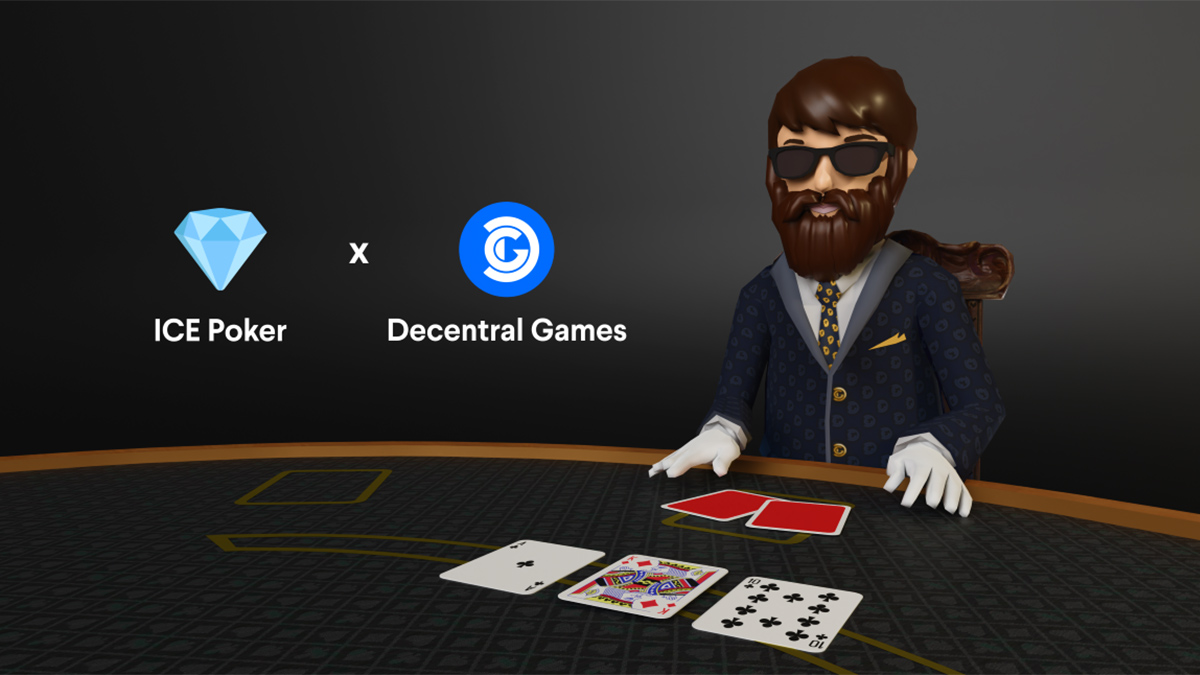 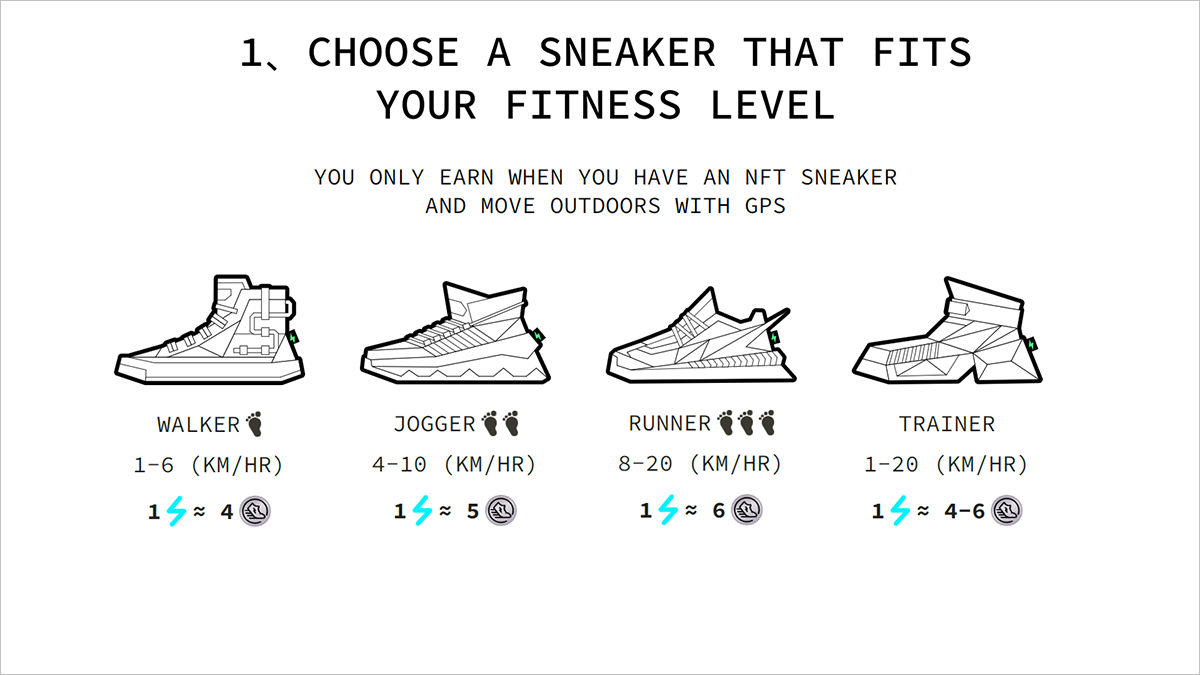 Wearable News
There are a lot of amazing wearable designers in Decentraland with a lot of very cool wearables. One that caught my eye recently was this tongue in cheek, pun of a wearable. An actual wear-a bell made by Cyclopa @opaaq0 on Twitter. 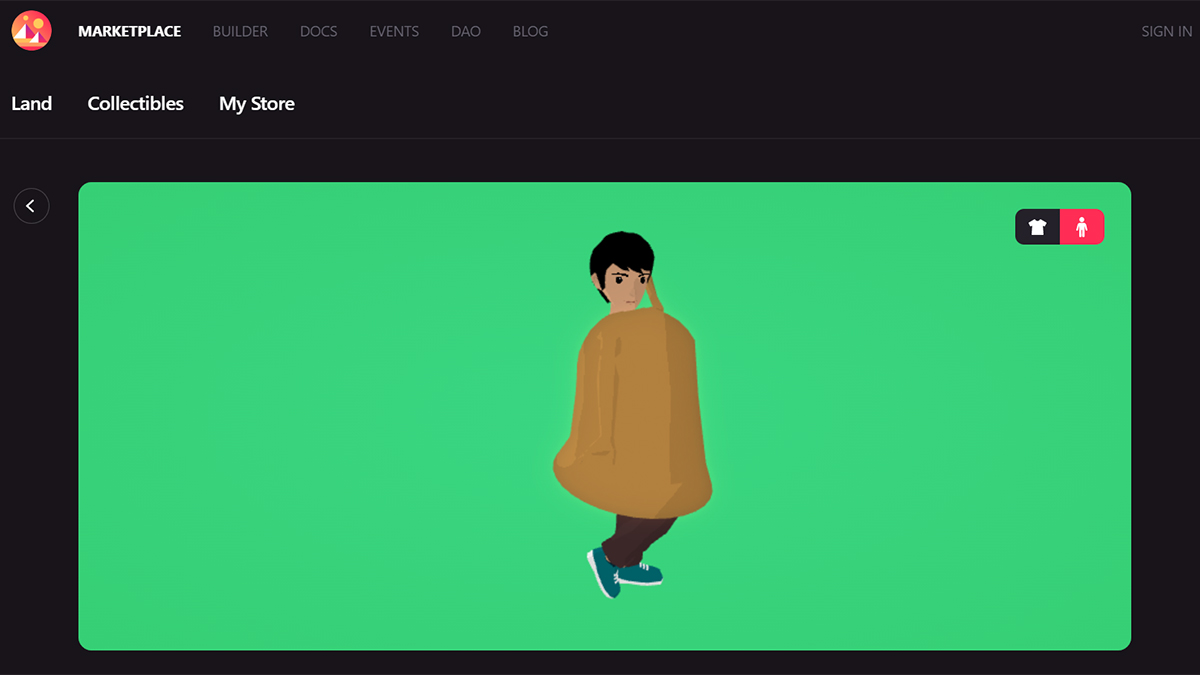 I laughed out loud when I saw the avatar swaying in the bell. Cyclopa is a wearable designer and developer in Decentraland and has done beautiful builds for Guerrilla Music and Parcel Party, among others.
Guerrilla Music bought our first Charity Guild ICE wearable. All the ICE earned in the poker lounge will go toward the Color the Blockchain initiative to buy computers and internet access for artists around the world. If you’d like to help us Color the Blockchain there’s more information here: https://opensea.io/collection/teamrapup 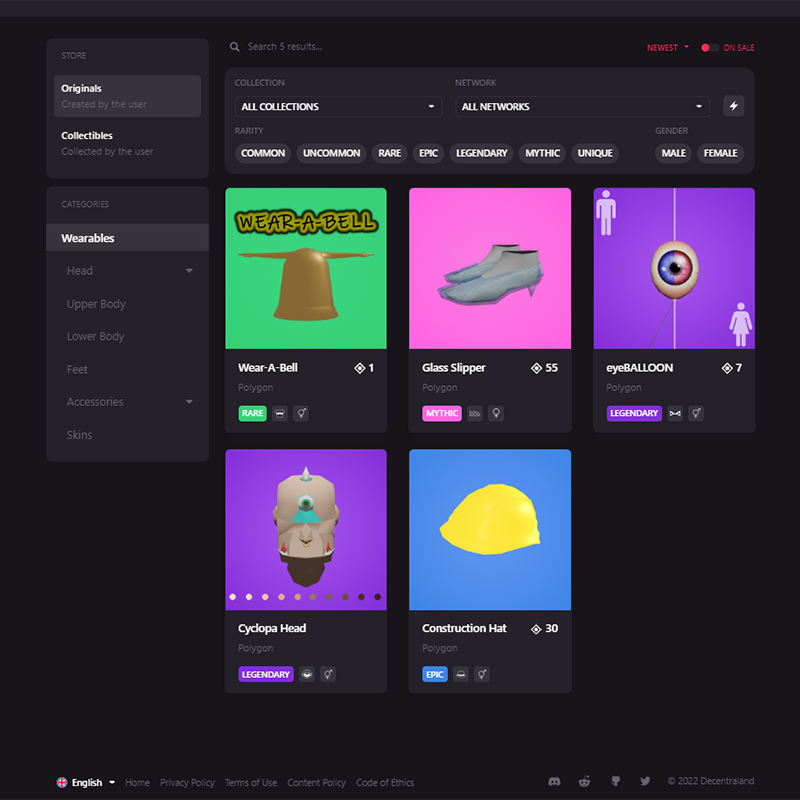 Metaverse Events
Sandbox seems to be the place the stars want to be. They’ve just welcomed the legendary Jamiroquai into the space.
“The metaverse is driving creativity through new forms of expression and technology in the music and entertainment industry, and it is an honor to welcome Jamiroquai to The Sandbox,” said Sebastien Borget, COO and Co-Founder of The Sandbox. “We now have partnerships with various legendary musical artists and labels including Snoop Dogg, Jamiroquai, BLOND:ISH, and Deadmau5, and we’re excited to be making The Sandbox a home where artists can connect with their fans in a direct and genuine way.”
Tuesday’s in Decentraland, join Guerrilla Music and Decentral Games for Meta-Verzus Español hosted by Pixelia and Milito. Spanish rappers and producers go head-to-head in the weekly Meta-Verzus music battle. 10 PM UTC/6 PM EDT in the Stronghold Lounge. Link: https://events.decentraland.org/event/?id=ebe696a5-1171-4fb4-83aa-513562662d15

Thursday’s join King Mizo for his weekly 2 hour Party & Bullish DJ set in the $ICE Lounges in Decentraland. Brought to you by Guerrilla Music and Decentral Games. Follow @KingMizoMadeIt on Twitter for links and event information. 9PM UTC/5 PM EDT in the Stronghold Lounge. Link: https://events.decentraland.org/event/?id=961752fa-a762-4bce-b218-06e3e07c5e62 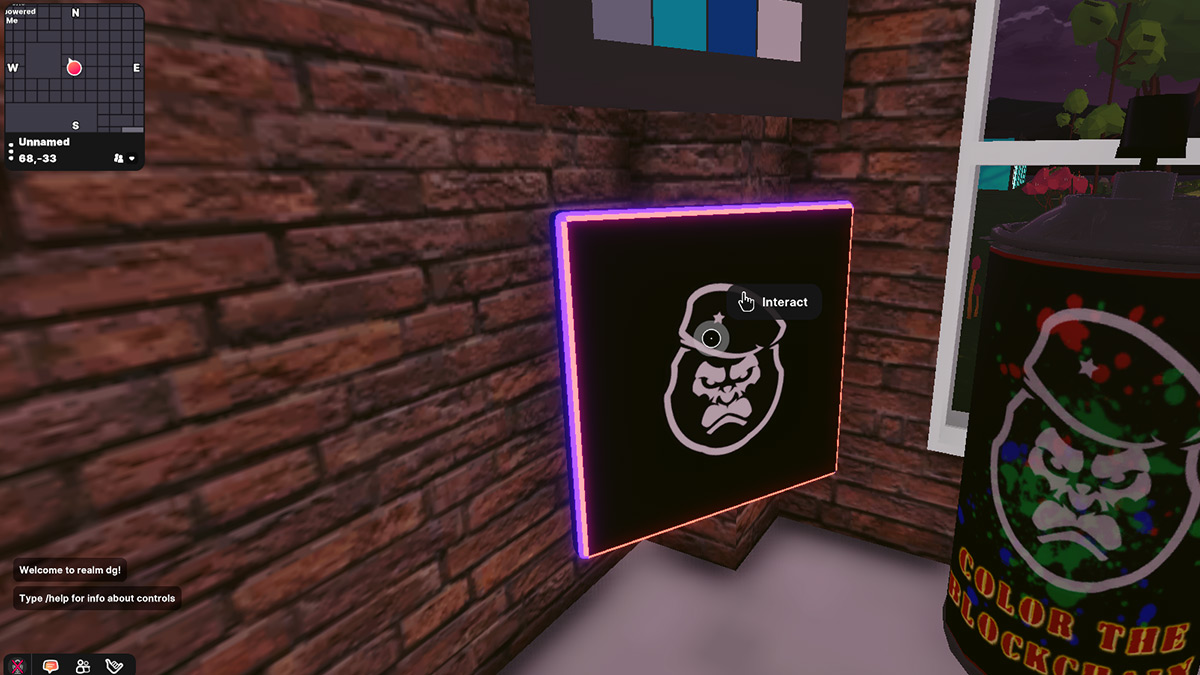 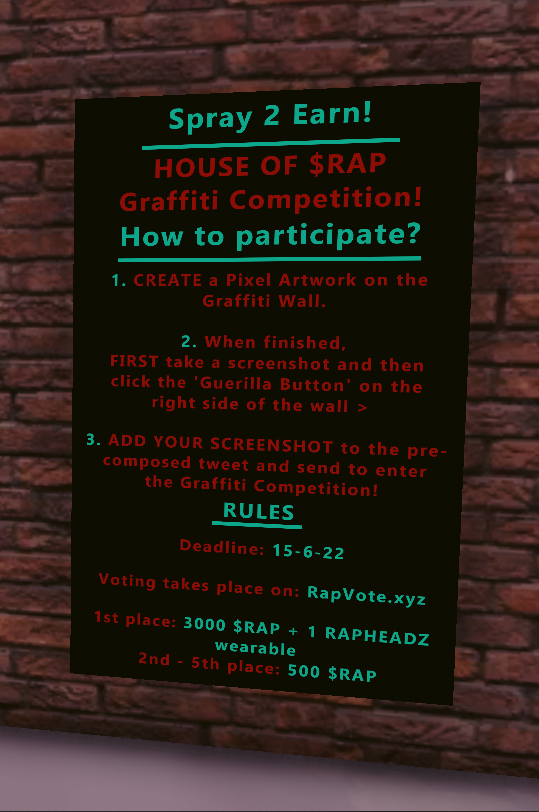 Music NFT Radar
About the STEMbits

7025 randomly generated STEMbits on the Polygon blockchain. The STEMbits are composed of 56 hand-drawn assets and 45 audio STEMS combining 8 different traits to create your unique STEMbits. Ownership includes creative & commercial rights of your STEMbits (& associated audio STEM) as well as initiation into the STEMbits-Trade it up community. Collect all the STEMs for any of the exclusive tracks and you will be able to FORGE a new 1/1 full track NFT (while keeping all your original STEMbits notes). None are the same and all are lit af.
Website: https://stembitsnft.club
Opensea: https://opensea.io/collection/stembits
Twitter: https://mobile.twitter.com/StemBitsNFT 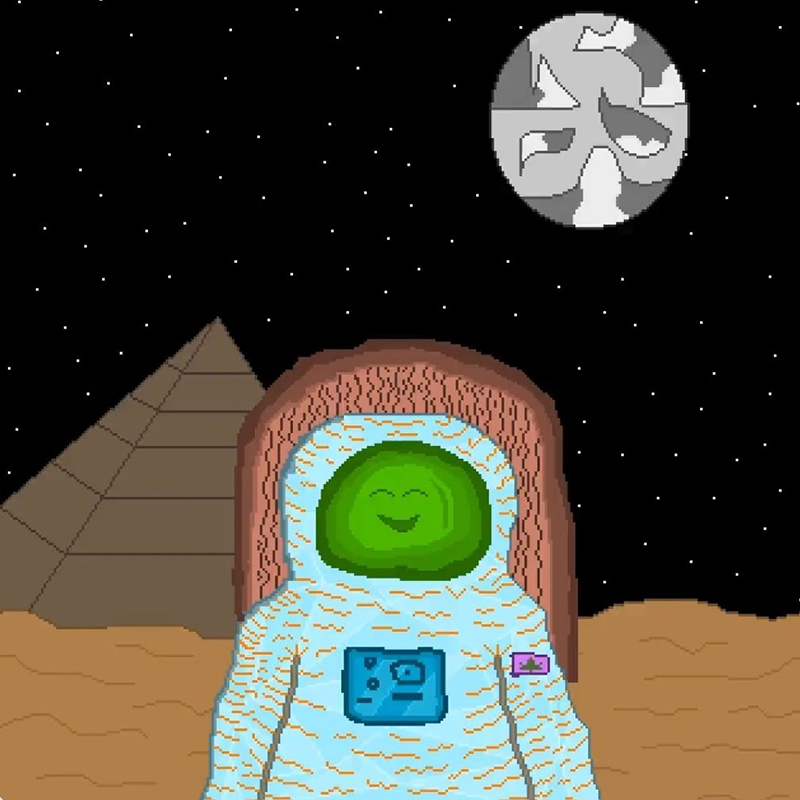 Q&A with the STEMbits Team
Q: What is the cost?
A: 1 MATIC
Q: Where can I get a STEMbits?
A: https://stembitsnft.club

Q: How many Full Tracks are there in total with there being 45 Unique STEMS?
A: There are 7 unique tracks created by Lil Astro! Each was created live in a Twitter Space in front of an audience, some big some small.
Q: Are any of these 7 unique tracks included in the STEMbits collection and if so how do I collect them?
A: Yes! They are all included! You have to collect each STEM from the beat you want, then get verified as a STMEbits track owner. Only then will you be able to forge a new NFT with the full track (plus downloadable content notes)
Q: What happened to the first 150 STEMbits?
A: 150 STEMbits were reserved for AirDrops to OG holders, Pre-sale events and giveaways.
Q: Where does my STEMbits live?
A: All audio, images and metadata will be hosted on IPFS. STEMbits forever gem (@ 100% mint we are seriously considering freezing the metadata onchain!)
Q: Is there a intergalactic romp-map?
A: Romp-map ALPHA can be found in the rocket-interglactic-romp-map
Q: Commercial Rights Concerns:
A: As the owner of a unique STEMbits and the subsequent, more common, STEM associated with it, you will have limited commercial rights to use this STEM and unlimited rights for your unique STEMbits visual art. You ARE allowed to use your STEM as a sample to create a unique beat/artwork of your own without fear of copyright infringement or having royalties sought from your commercial gains. You DO NOT HAVE EXCLUSIVE RIGHTS to bar other owners of any STEM and its sounds from using it in a similar creative fashion.
—
Written by @ADayInTheSky, and curated by @KingMizoMadeIt.

Drake has released a wild and hilarious new visual in support of Certified Lover Boy. Even if you don’t like the song, you should…
On Nov. 5, 2018, US rapper DaBaby was involved with a deadly shooting inside a North Carolina Walmart. UK YouTuber Trap Lore Ross takes…
The hip-hop community is in mourning after a statement posted online confirmed the death of another young star in the making. After going missing…
Trap Lore Ross breaks down the impressive and rapid rise of LA-based “55th Street” rapper Crip Mac aka C Mac. This past year saw…